The sixth episode of #HouseOfMolteni is set in Brooklyn. Eric Christian, musician and photographer, takes us to the discovery of his house and the borough.

The sixth episode of #HouseOfMolteni is set in Brooklyn. Eric Christian, musician and photographer, takes us to the discovery of his house and the borough.

I believe home is a place that you need to be able to come to, to feel comfortable and relaxed and to escape from the rest of the world or the city. It needs to be entirely its own environment. So my home is a place where I can come to feel comfortable, to feel myself, and to feel inspired at the same time. Also a place to feel happy to return to wherever you're coming from.

I believe home is a place to feel happy to return to wherever you're coming from. 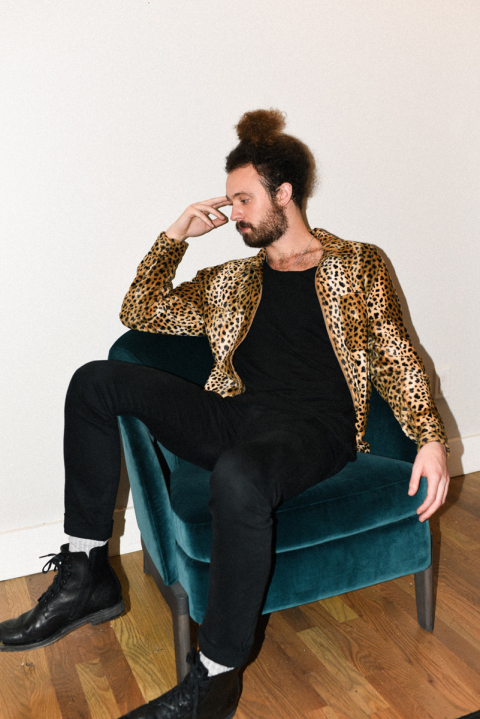 I chose all the furniture and it took me a couple of months to pick a couple of things. I pulled some inspiration from different places I've lived before as I've moved around a lot in the last couple of years. This time however, I wanted to put in my effort to start completely fresh so everything here is brand new this year.

I have a few works of art but nothing special. They're just pieces I picked up on the streets from traveling, whether that's central park or a street in Paris.

I draw most of my inspiration and ideas from cinema. I've always loved film and I've always kind of attempted to live my life like a movie (which may not be the best plan of action for life). But going to the movies and experiencing the pictures, the scenes, and the people is the biggest inspiration for how I take everyday life. 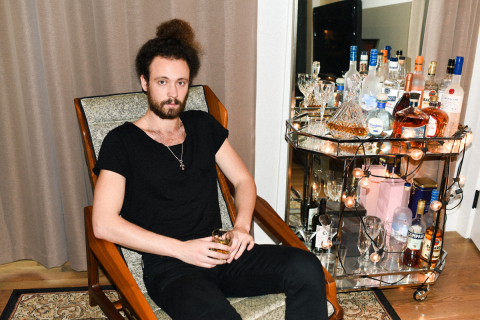 There's a couple of separate rooms here because I have a roommate. We're in a two bedroom with one bedroom on each end.

My house is a place for sharing. The main reason why I wanted to move here is because we actually have a private balcony on the side of it. I've always loved to host and have friends over whether it's an intimate one with just two people or a dozen friends. My house is always a place for people to come to. I give everyone my door code, they're welcome to come anytime and I want it to be a place where everyone feels at home. 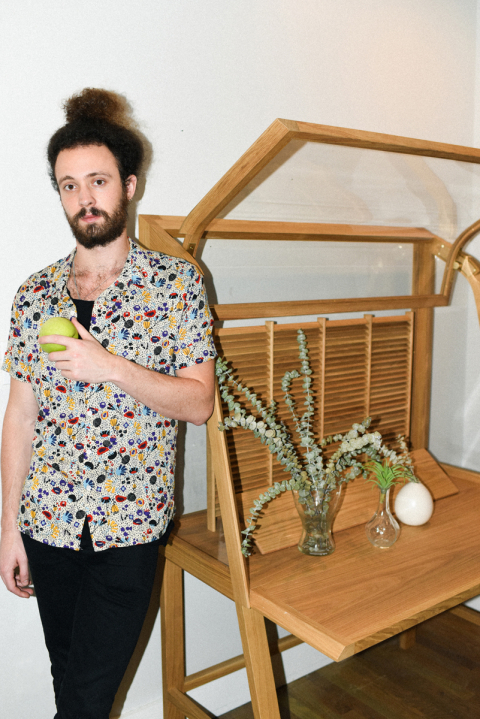 I think that the similarities between the two that I've learned, is that they're constantly evolving and changing. The barriers of both are constantly being pushed to new limits and to new ideas but at the same time, I find that they're also recycled every ten to twenty years. What was once once now becomes new again for both categories. The differences I suppose are how they're represented. Sometimes for fashion, there's a very personal approach. You might be required to dress or showcase yourself in a light that you'll be presented in in front of other people so you're cautious of their reactions to you. With design, you can kind of go wherever you want with it. It's completely of your mind and anything you want to represent there.

Definitely a Shower. As much as I love to take my time in the morning, nobody has time for a bath.

I've lived here for a year now and I've grocery shopped once. So definitely eating out for me. There's too many good restaurants in Brooklyn to cook at home.

New York is where I want to be right now

I've lived in a few different places and have already been able to knock off a couple favorites. I struggle with wanting to be everywhere but New York, I would say, is where I want to be most. It's the most comfortable because I have family nearby and most of my friends are already here. I've lived in Los Angeles though for a brief period and Boston for years. I've also spent some extended time in Europe to feel that out as well. But New York is still my favorite place in the world. Although I know that with time, you always want something new and different so I could, for a couple of months want to call somewhere else home like Tokyo, London, or Africa but New York is where I want to be right now.

From this episode will also be available the "City Guide" column, an exclusive sneak peek at the life of the protagonists and the favorite places in the city.

Why do you like it?
My first day living in this apartment, I had no heat, no bed…basically nothing. This place is a just a few blocks from here so I went. The vibe of it reminded me of downtown LA a bit with the industrial warehouse kind of garage door and right away, I met the whole team of baristas and the owner that welcomed me like family.
But most importantly, no one else I knew at the time knew about this place so it's kind of been my own safe cafe sanctuary where I can escape from the world and not see anybody I know.

What is it good for?
They're known for their coffee and their roastery is actually at this shop here in Bushwick. You can pick up a couple pastries along the way but it's a very coffee only atmosphere.
They have some of the best roast so its for people who love and know coffee. 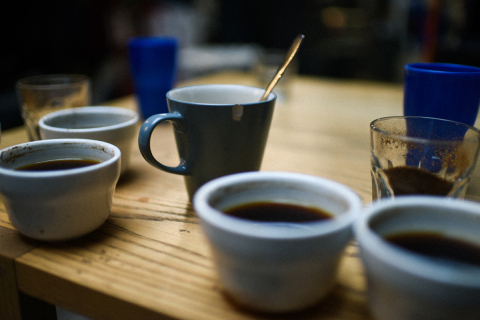 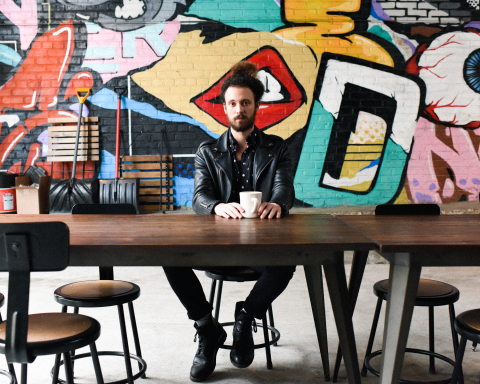 Why do you like it?
This is one of my newest found hidden gems in this area. A good friend of mine, who I found out lived just a few blocks away from here, had recommended it to me and the first time I went I just fell in love. It's a place where for my day to day life, I like to just go and relax. The same way I like to enjoy my home to be myself and not have to see a million people. To be able to enjoy a glass of wine, a drink, or a bite. To know the bartenders, to know what music will be played and to relax and escape.

What is it good for?
Topaz is a beautiful cocktail bar with the best french fries you'll find in the entire city and overall a great atmosphere 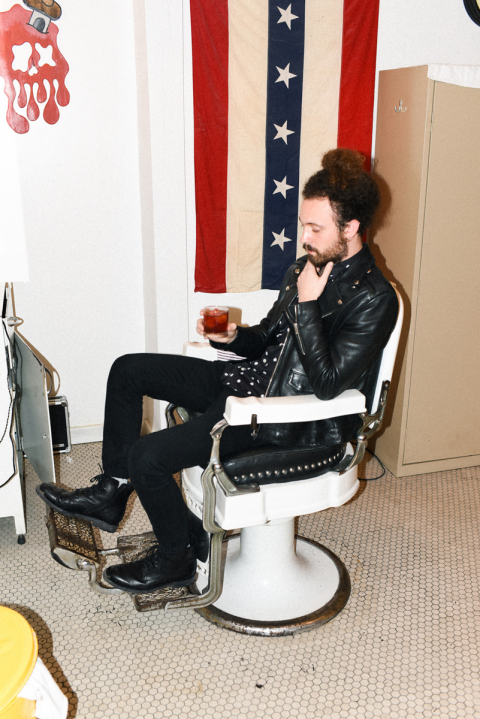 Why do you like it? Years ago before I lived in Brooklyn, I stayed at a place called Urban Cowboy which is just over down the street from here. The owner had told me to check out Blind Barber so I did and had a great time enjoying drinks there and meeting up with friends. Fast forward to years later, when I decided to move to New York, I was looking at apartments for about two months everywhere from upper west side to financial district to Brooklyn. One day I got very sick of it searching and I was coming to look at this building but the guy was about an hour late so I just pulled up local bars and realized Blind Barber was the closest bar to me. Then it just kind of felt like this circle back to my first time really spending time in Brooklyn and now I was here looking at a building that's so close to Blind Barber. It just kind of felt like home. Also I'm here at least once or twice a week. It's like my second living room.

What is it good for? Great for its cocktails and its beer selection. But there's also a barber shop in the back so if you need a haircut, you can grab a drink first and then get your haircut. They also do brunch on the weekends with bottomless mimosas and bloody marys along with fun things throughout the week like Taco tuesdays and trivia on Mondays. But I'd say it's mainly for the liquor and the haircuts.

Why do you like it?
It's just a friendly, welcoming, and beautiful location with great lighting. Its been used in plenty of movies and I now understand why. It's a routine meet up for my friends and I so if we don't know where we're going, Toby's seems to usually be the place to start for us to organize our plans. It's an overall welcoming environment and great place for a good cup of coffee. 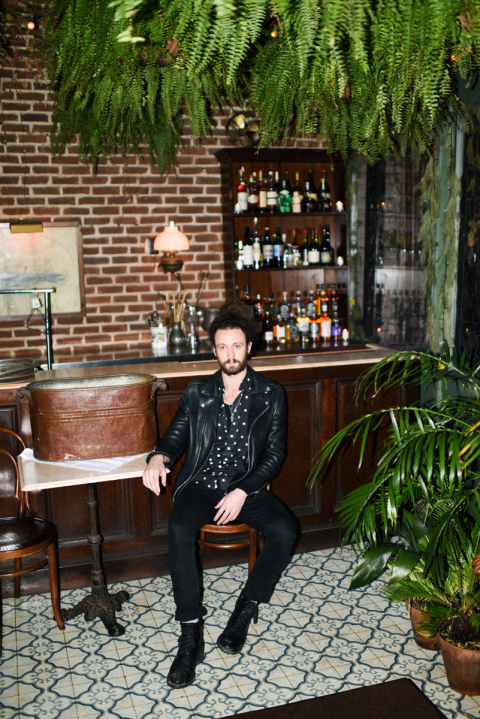 Why do you like it? This was another one of my first experiences in Brooklyn. It has the most impressive display of mixology I had ever seen and it's also just an incredibly stunning restaurant with a beautiful garden patio in the back. We'd gone there for brunch for one day and immediately fell in love and came back the same night for rounds and rounds of cocktails. Everyone there is extremely professional, as knowledgeable as they could be at what they do, and treat you as if your family, which makes all the difference in new york.
What is it good for? What is it not good for? Everything on the menu is good. They're great for their oysters and it has one of the largest selections in the state of New York so all the oysters are absolutely incredible. And then of course, the cocktails. The effort put into each drink order is far beyond what you would expect with the highest level of quality so I recommend a couple oysters and cocktails.

Eric Christian von Fricken is a Composer,  Creative Director, and Social Influencer primarily based in New York City. As a Leica sponsored photographer, Eric has worked on campaigns developing content for brands such as Christian Louboutin, Movado, Jaguar and The Macallan, and sharing them to his social audience on his Instagram and blog. A graduate of Berklee College of Music with a Bachelor of Music in Film Scoring, Eric has written music for television commercials for brands such as Mercedes-Benz and Land Rover. Eric is also developing a name as a film composer and working his way through the independent movie scene.
In his free time Eric enjoys traveling, taking photos, and writing sad songs. He is currently located in Brooklyn.